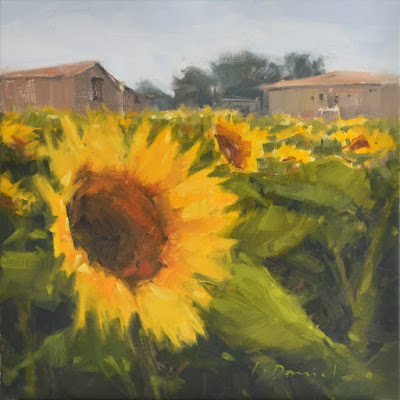 This is the third of four paintings that are on display in the Davis Gallery "Radiant" show. I have had several people ask for more details on the underpainting technique I used to achieve the glow in these paintings. SO... below are process shots of how I preserved the golden areas by laying in a stain of Indian Yellow. Unlike the cadmium family, this yellow is transparent and works well as an undertone without contaminating the layers above. (Cadmiums are opaque and tend to mix into and change subsequent layers, instead of glowing beneath them.)

Below you can see how I went from my block in, straight to staining the "glow" areas. This allowed me to preserve those areas for later development AND provided a base tone that would glow through subsequent layers. 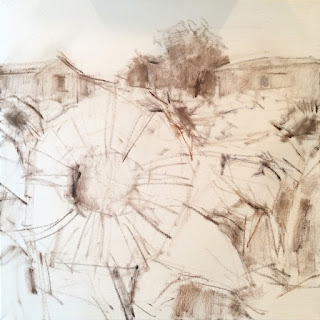 Sketch and beginning of block in. 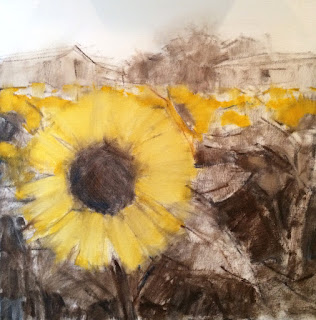 Block in with Indian Yellow applied to floral "glow" areas.
I painted the yellow in, then wiped it out leaving a stain behind. 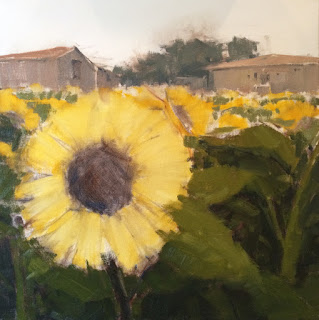 Working dark to light, I return to the foliage...
Darkest darks and highest contrast in foreground, muted and softer in background.

In the final stage, I add highlights to all the greenery and develop the flowers.

Perhaps the biggest development is how that front flower "tilted it's face" in these final marks. It's never too late to change things, and that was an important one. I thought it looked too rigid facing forward, so I used information from flowers behind it to change things up. I like the final gesture of that front sunflower so much better! It feels much more natural to me. :)

Personal GrandBaby Update: I am still in heaven with my daughter's family and their new baby girl, and so grateful for these days of bonding. Her name is Laurel Anne (she'll go by the double name), after me and her other grandma, whose middle name is Anne. What a great honor for us! 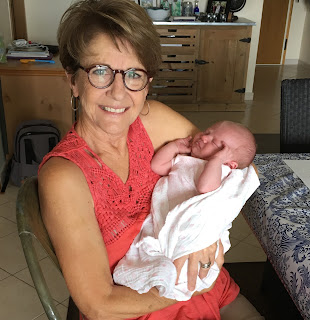 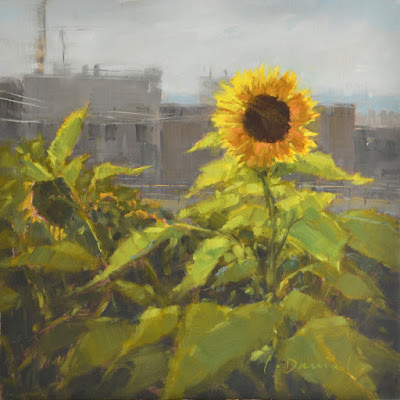 I love that sunflowers come in many varieties. They are cultivated as a farm crop but they also make wild appearances along country roads and city highways. These untamed beauties were especially captivating to me, as they shimmered in juxtaposition to the hard lines of the cityscape in the distance. That contrast greatly enhanced the brilliance of the delicate flowers.

One painting technique I used to depict "radiance" with these sunflowers, was to use an undertone in the brilliant areas. I did my block-in as usual, but before building up the values and color, I added passages of Indian Yellow where I wanted the color to pop later. Indian Yellow is transparent and can easily be used like a stain (if applied thinly and wiped out it's unobtrusive to subsequent layers.) I then continued to work from dark to light, as usual. That intense undertone not only saved the place of the brilliant areas, it helped to cast a radiant glow. (For purchase inquiries, please contact Kevin Ivester, kevin@davisgalleryaustin.com.) 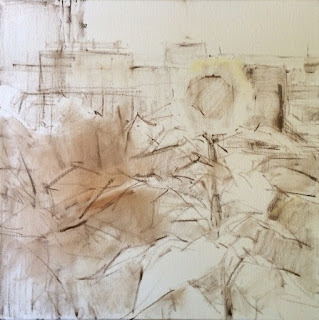 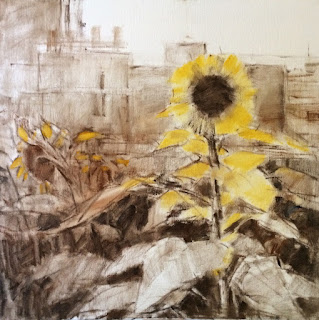 Block in with splash of Indian Yellow to mark the brilliant areas.

Baby Watch Update: Our sweet baby granddaughter was born early Monday morning (on her due date), healthy and happy! What a great blessing and honor it is to be here, and to see this dear new life as she meets her family and the world for the first time! Her big brother is pretty taken with his new baby sister! Such JOY!!!!! 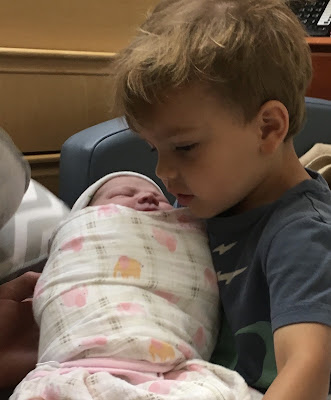 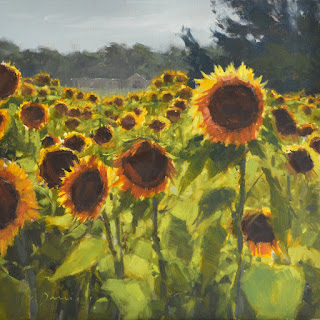 Field of Orbs
Available at the Davis Gallery in Radiant Exhibition

This weekend, Radiant opens at the Davis Gallery in Austin, TX. A description from the show curator says it best... "This group show is focused on radial compositions, luminescent surfaces, and all things Radiant. The goal of the exhibition is to invite our audience to explore the importance of form, composition, and tone, by studying how each piece fits into the show's parameters. Each artist created new work specifically for this exhibition, or carefully chosen work from the past, which uniquely recognizes the Radiant concept."

As I considered this challenge, sunflowers seemed like one of nature's perfect examples of radiating forms and luminosity. They became my personal focus (and obsession!) as I prepared for the show. I am pleased to have 4 pieces on display, and will post the others in the coming days and weeks. Please stop by the gallery to see the work if you are in town! For purchase inquiries, contact Kevin Ivester, kevin@davisgalleryaustin.com.

On a personal note, I will not be at the show reception, as I am off to Italy for the birth of my 3rd grandchild! Hard duty, I know! Grandma duty is the best! More on that as well! ;)
Posted by Laurel Daniel at 12:07 PM 5 comments: 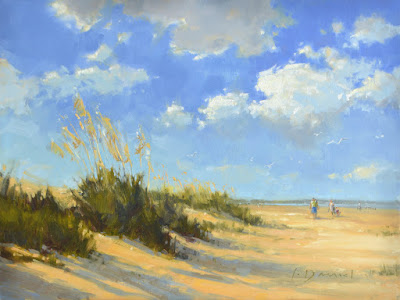 As I was considering the final touches on this painting, I couldn't escape an urge to add some life to the scene. In order to capture the depth of the beach and the height of the sky, I needed a human reference for scale. Below is a shot without the people, just so you can see the before and after. I was hesitant - I wasn't going for a figurative painting, and what if I screwed it all up? But the painting kept demanding something more so I went for it. I am glad I did... Those people added just the right dynamic, focus, and most of all, that missing sense of scale. It's good to respond to inner nudges, even if there is a little fear involved. Nothing ventured, nothing gained! 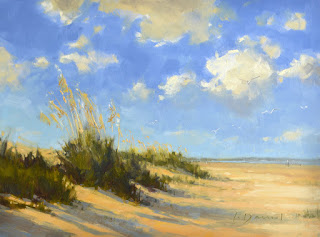 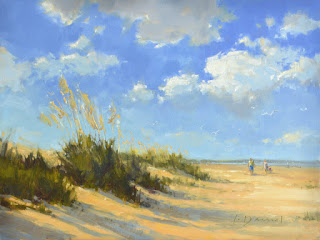 AFTER
Just a little bit of human reference shows how deep and wide the beach is.
Posted by Laurel Daniel at 7:31 PM 5 comments: 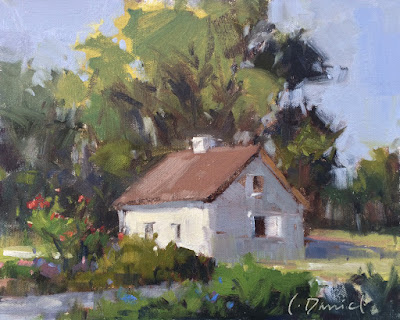